Born and raised in Rhode Island, I loved to draw. I admired Jack Davis and Mort Drucker in Mad Magazine as well as cartoonists David Low and Al Hirschfeld in the New York Times.

Attended Boston University, majoring in English, and lived in Boston for four years. Worked on the student newspaper, where I contributed articles and cartoons, learning page layout and type specification by character count.

Sold my first commercial drawings to the Boston Herald.

Attended classes at the School of the Worcester Art Museum for a year, then back to Rhode Island, where I contnued to contribute cartoons to the Boston Herald and to several alternative publications, like the Boston Phoenix and the rock magazine Fusion. 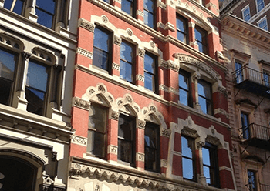 Spent ten years at Albrektson Studio in downtown Providence. We used steel t‑squares, X-Acto knives and Rapidograph pens then. And a big photostat camera. Among our clients were Fram automotive products and Gorham silverware.

Worked in Providence ad agencies Horton Church and Goff, then Creamer Advertising as art director, where I did a series of ads for Merriam-Webster dictionaries.

Then to Spencer Bennet Nowak in Seekonk, Massachusets, where I designed new product ads and brochures for Monsanto.

Moved to Tampa, where I worked at Chenoweth and Faulkner and Reeser Advertising Associates, as well as freelance for over ten years. That’s where I picked up the Mac, first with Quark, then moving into Adobe Illustrator, Photoshop and InDesign, using those apps to create ads, brochures, and logos.

Returned to Rhode Island where I continued to freelance, furthering my interest in Web design, using Adobe Dreamweaver.

I drink too much coffee.